'Tis but thy name that is my enemy;
Thou art thyself, though not a Montague.
What’s Montague? It is nor hand, nor foot,
Nor arm, nor face, nor any other part
Belonging to a man. O, be some other name!
What’s in a name? That which we call a rose
By any other word would smell as sweet;
So Romeo would, were he not Romeo call’d,
Retain that dear perfection which he owes
Without that title. Romeo, doff thy name,
And for that name which is no part of thee
Take all myself.

She sits in a small, white cell, on the small, white, lone bunk, in her white paper pajamas, staring up at the white ceiling and the (not white) camera pod there. The pod is synced to the camera in the hallway; if any significant activity happens differently on one than the other (i.e., if she tampers with the one she can actually reach), many alarms will go off.

She’s not looking to escape (yet), so that’s not an issue.

“Names,” she says, aloud, writing the word on a virtual piece of paper in her head.

AEGIS insists on a “secret identity” for her, which, to be honest, seems like a good idea. Associating with the daughter of one of the most notorious science villains of all time, having a record as a terrorist herself, would do neither the agency nor the Menagerie any good – from a publicity standpoint, she hastens to add. It should be of great benefit to them, and to her, if all goes as intended.

A secret identity requires a secret ID, a nom de guerre, a sobriquet (she’s spinning up her inner thesaurus). It will also require some sort of mask, hood, or other facial recognition defeat system (and gloves, and voice prints, and even more elaborate biometrics).

The Western Media – at least in the city, and probably beyond given the abrupt international notoriety the group has received from Vyortovia – will throw all their resources into determining who she, as a new member, is. Hidden identities are increasingly rare, which makes them all the more intriguing.

What makes a good “hero name,” though, is a matter of taste, image and branding, trademark, and the ability to stomach the matter. Alycia Chin resents the need to hide herself, even if she understands it. In some ways, it’s no different than the identities she’s assumed in the past. But this is – if not permanent, then long-term, and meant to be about herself, not about hiding herself. Hiding herself, but being herself.

She shakes her head, organizes some headings on the mental piece of paper, begins.

She lacks some flashy external power – super-speed, flaming head, glowing aura, lightning bolts – that many folk use. She’s not – will not – be known as some patriotic term, or hero associated with one particular group. “Citizen of the World” she said. That cuts away another field to use.

All right, then – personal or abstract qualities that she would represent.

Might as well go on the nose with her current “agenda.”

Ugh. She sweeps those off the table. Too abstract. Too … groveling. She wants redemption, atonement, all of that. But wearing the sentiment on her sleeve? No.

That’s wrong on so many levels.

No, that’s getting worse – it sounds like she’s trying to justify what she did. She cannot. And will not. And she knows that many would consider justice for her crimes to be something quite different.

And that’s beginning to get into “opiate of the masses” territory. Alycia Chin has no formal view on spiritual matters, save for a vague sense of there being purpose to the universe that is beyond simple comprehension. Her contempt is fierce for most organized religions as tools used by the power structure to regulate the rebelliousness and defiance of their followers.

No, she won’t even sound like she’s part of that.

Okay, a different tack. What else is she trying to do, to be?

Hmmm. Not bad. Not distinguished (and she’s pretty sure one, if not both, is already taken by someone) but maybe that’s the right track.

Pivot again. No flashy powers, but what is it she does best? That makes her stand out.

She’s aware she has an ego, but not so large (or fragile) a one as to use that as her name.

Hmmmm. Something there. Not the first, but – they’re short, snappy, interesting, hint at possibilities and skills. Not quite right, but in the ballpark.

Mythology is another common category to draw from. She has no strong ties to her Chinese heritage, and, operating out of Halcyon, most Chinese names or translations of these words she’s considering will sound odd and awkward.

But Greco-Roman mythology pervades the West (a result of both nations’ imperialism millennia ago), in a way that other Western ethnicities (the Norse, the Slavs, etc.) cannot match. So …

Let’s not start out a new career being sued. Also, though she does not consider herself physically vain, no 17 year old woman wants a name with “hippo” in it.

Hmm. The Furies, the Erinyes, were punishers of evildoing, something that fits tonally, but the word has morphed in usage to something different. Does she want to be known so much for being angry?

Who were the Furies?

Hmmm. A play on words? Her given name, Alycia, means “noble”.

Ugh. No, that sounds too royalist.

Interesting, even egalitarian, but … well, no, she doesn’t have many peers.

Chin (or its Pinyin version, Qin) doesn’t carry a meaning. It was the name of the founder of the first imperial dynasty in China (hence the nation’s name).

Given her rejection of her father, no, probably not.

Okay, how about lampshading it?

Hmmm. Worth considering. Not quite there, though. And does she want to actually encourage that sense of mystery, to challenge people to penetrate her “secret identity”? Probably not.

That draws a laugh out loud, which probably confuses the people monitoring her.

Mysterious, but playful. Testifying to her training. Challenging people who don’t believe in her, who doubt her sincerity (and they will be – are – many).Layers within layers.

Put a pin in that one for now. Something better might come up. If not …

“Silencer” off the table, then?

Out of the all the options mentioned, I liked Adept. Don’t know why, just sounds good. Certainly doesn’t hurt that if someone started to say Alycia correcting into Adept wouldn’t be too hard.

If X is suggested, Leo’s response would be…

Athena: “Great, you can go talk to Hecate for us.”

Megaera: “Disney movie fans actually would recognize this, and probably associate it with a woman scorned who falls for the hero. Is that you?”

Mystery, Enigma, Riddle, Subtle: “Nothing mysterious about shooting people. Go for it if you’re gonna sneak around and plot stuff, though.”

Charade: “A charade is something people fall for, or a deceit. Enough of this charade, that sorta thing. I mean, if that’s the image you want…”

I don’t know, you pick something: “Name yourself for who you want to be, not who you are. Make people expect something from you, and expect it from yourself, by taking that name. You can pick a name nobody else would take, and make it your own.”

I’m also surprised that Eris wasn’t in the running. From what has been written already, it feels like Discordianism would be right up her alley.

I’m also surprised that Eris wasn’t in the running. From what has been written already, it feels like Discordianism would be right up her alley.

Yeah, I dig that particular train of thought.

Having “Concord” and “The Discordian” on the same team would also tickle me pink but I’m not counting on that.

And FWIW I do think Charade is a fine name. It’s something that may teach Alycia something about herself too, or continue to teach her if she ever forgets. It feels like it could be an ironic reminder of her past life too.

And FWIW I do think Charade is a fine name. It’s something that may teach Alycia something about herself too, or continue to teach her if she ever forgets. It feels like it could be an ironic reminder of her past life too.

This also gave me an idea for a uniform design. I’ll have to play around with it when I get home just to see how it looks.

Oh god, please let AEGIS provide her with a Department 33-approved teen hero costume, then have her tear it to shreds and build something new.

Oh god, please let AEGIS provide her with a Department 33-approved teen hero costume, then have her tear it to shreds and build something new.

Something pink and short-sleeved and crop-topped, showing her belly button, with matching short shorts, sneakers, and hair bands. “We believe it’s you, Ms. Chin.”

Which isn’t to say she won’t change her name again down the road, if her own self-perception or agenda items shift.

Equal parts because someone brought up the Red Hood in relation to Alycia joining the team and because this is all theatrics (at least from Alycia’s point of view), this was my initial take on Charade’s costume. 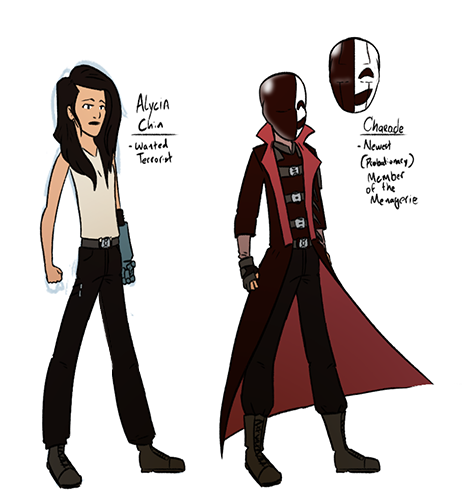 So that is absolutely nothing like what I had been thinking, and if you’d told Alycia you were going for the theatrical look she’d have broken your kneecap – but it is an effective disguise. And it gives her a smirk when she can’t show a smirk. And the mask should help vs. the biometrics, and the bands break up the body structure. There’s a lot to like there. Make sure the fabric (esp. the mask) breathes properly (comfort counts!) and you might be onto something.

Kind of gives off a Cheshire attitude from Young Justice, which I really like.

It can also be a product of limited options. AEGIS’s focus-group-approved option got torn to shreds. Her handler might take her to the evidence locker for captured supervillain stuff, including their costumes, and say “off the rack is all you got, honey”. Or they might visit a theater and costume shop…

Kind of gives off a Cheshire attitude from Young Justice, which I really like.

I can think of worse not-really-the-same-but-similar-vibe analogies.