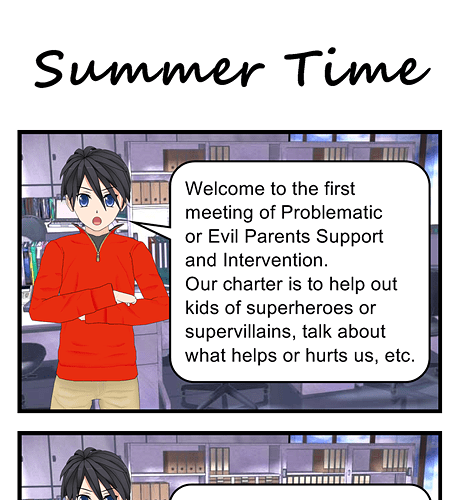 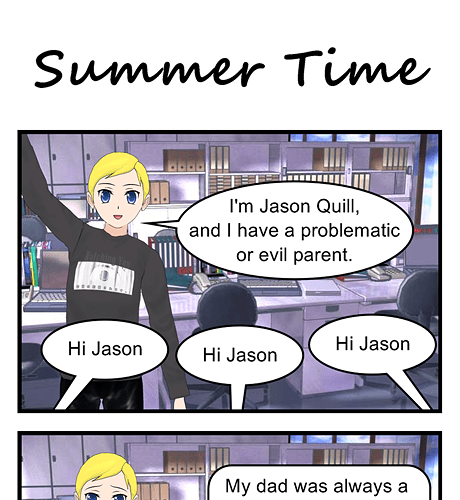 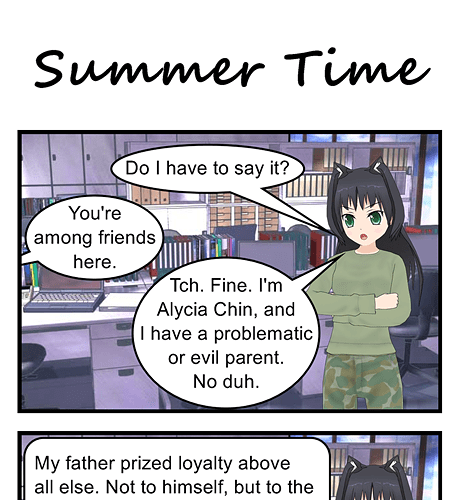 Alycia cooperated with this? Not bad. 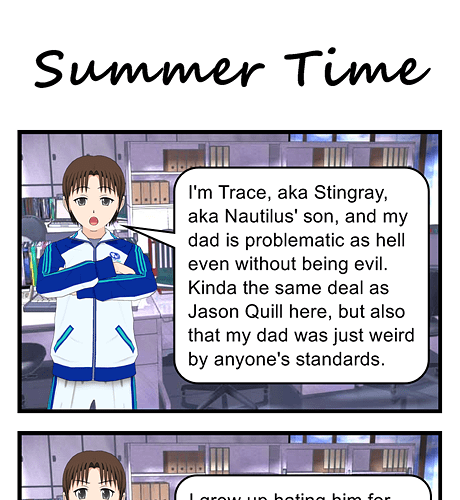 If others are hungry, we can call out for subs. 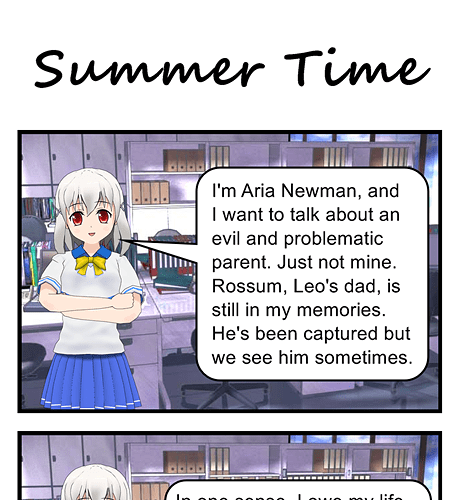 Aria on the bright side of life. 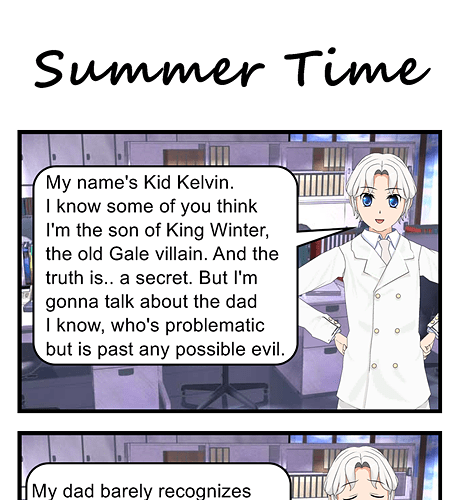 I’m starting to get into backstory that I mostly have from memory, so any corrections or amendments are welcome. 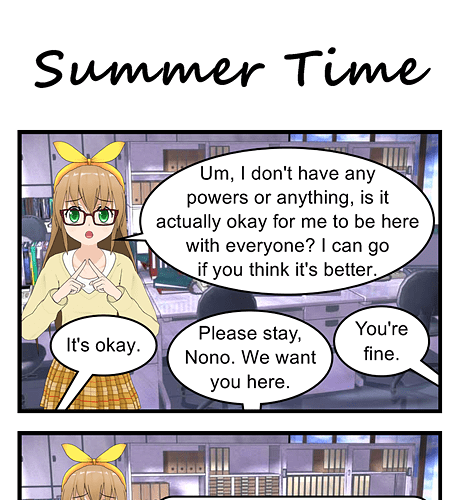 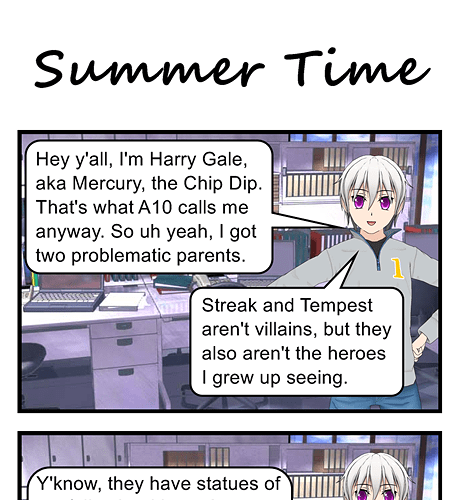 There are a lot of bad parents in this game, y’all. 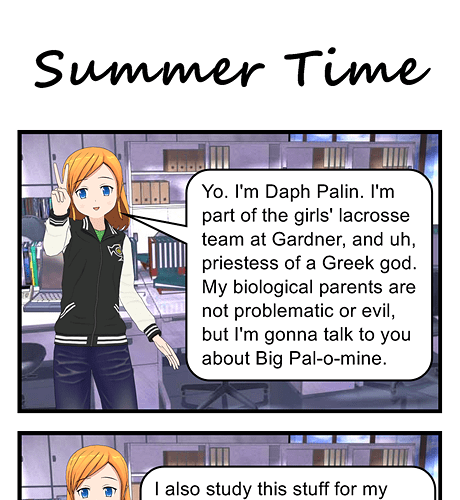 That’s everyone I can think of for now. Any requests, suggestions, or comments so far?

So, all told, a fine array of “Yes, kids, your parents are awful, which is part of what makes you great characters to play.”

(Adam is an obvious exception, except his powers act as a parental proxy, driving him to things he regrets doing. That he has actual parents who are wonderful but strict people is just icing on the cake.)

I believe you got Charlotte’s backstory down pat for these purposes. And Jason was spot-on. And Alycia …

It’s taken great effort to really experience a normal life, not just fake it as part of an infiltration or assassination mission.

Yeah. That’s sums up so much of her.

If I had a request (and it’s only if you’re inspired to it), it would be Summer. We got Leo (well, no, we didn’t, but we know he really keeps that stuff bottled up), and we got Aria, but I’m curious if Summer’s experiences give her a slightly different perspective from her sister.

…Summer. We got Leo

Leo’s got his own perspective, and Summer does too. I didn’t want to front-load three versions of the Rossum story, because I wanted to make time for other characters to talk. I think it says something that we could take the “PEPSI” premise and see so many different takes on what it was like or how it ought to be.

These conversations eventually turn into “what kind of parents will we be”, but not here or now.

Adam is an obvious exception

This is a separate topic, but I feel bad, so I’m gonna talk about it.

“Bad dads” was a recurring theme in the game. I wanted to do a “kids go for coffee every Monday” type group like this for awhile. But as mentioned, Adam’s actually been gifted with good parents. How he sees them might have changed, and I could talk about that. But I left him out of this for now.

The Pidgeverse’s “Experiment” also left him and his female counterpart out due to their ages. I’m already not letting that plot devolve into a sex comedy with kids who are almost 18, so those two got sent off to have cake or something. But that’s still two long-ish comic sequences with nothing for Adam.

I’ll figure something out for him that isn’t just The Jordan and Summer Show Guest Starring Her Brother.

…Now see, having written that, I get some ideas. The first I already knew about: I really dig juxtaposing Adam’s normal life on Earth with Kirby-esque fantastic space shenanigans, but ComiPo is pretty limited in what I could do for alien vistas, nonhuman characters, and the like. There’s a couple ways around that (green-skinned space babes, a Supernatural-style aliens-in-human-form thing), so I just need a specific plotline to hit me.

The second comes from “The Experiment”, and a reflection on Summer-as-big-sister-to-Adam. It’s probably okay if a younger boy hangs around an older girl, but society won’t permit the same relationship in the other universe. So Sunny might have been closer to Jordan, leaving Amelia without an older-sibling figure like Summer. Leah might be that person, the way Leo & Adam hung out, but she might be as busy as our Leo. So it might be interesting to see a serious Sunny/Amelia conversation about this play out as they hang out with a larger group.

@insomn14 as always if you have opinions about how I’m depicting your characters or comic plots for them, step in and let me know (or veto anything you don’t like). I’m also still looking forward to more Tribunal stuff but I know your art queue is rough, so I’m happy to be patient.

I completely understand that Adam doesn’t mesh well with certain ideas (thanks for leaving him out of the Pidgeverse Experiment stuff for all the reasons listed) so don’t worry too much, I don’t feel left out.

But I will say that if you have an idea (particularly something in the genre of “Kirby-esque fantastic space shenanigans,” because that is my favorite genre) and can’t get it to work with ComiPo, you can hit me up on Discord or PMs and we’ll see if we can get something made. I always wanted to make more comics for the Masks game but with them taking as long as they do and me and my issues with my own writing, they just never seemed to come together the way I wanted.

I’m also still looking forward to more Tribunal stuff but I know your art queue is rough, so I’m happy to be patient.

I’ll see if I can get this finished up by this weekend. No promises but it is on my radar.

I do want to amend one thing: that offer goes for whatever. If you get an inkling for an Otto/Leo buddy road trip story, Charlotte’s first day as the Magus and official duties, or anything in between, I’d be down for that too. 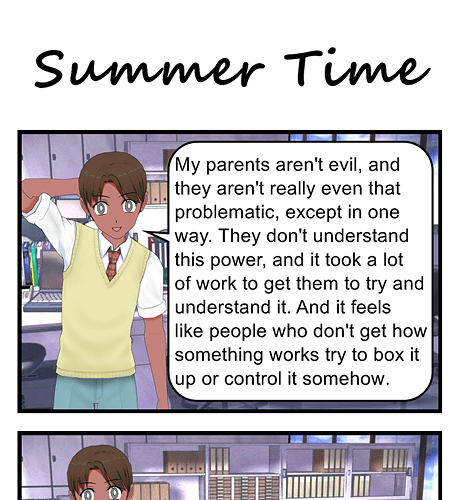 This is what I hope is Adam’s story, condensed into four panels. 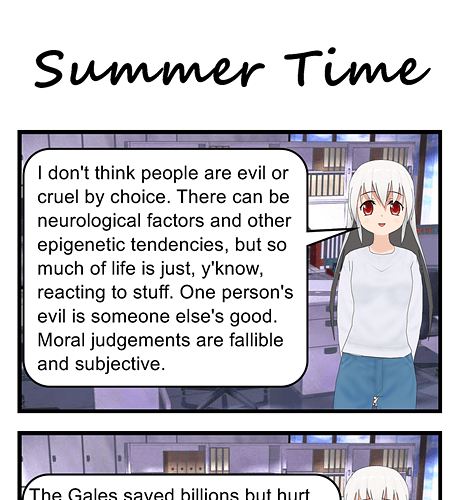 And here’s a Summer-y of what the other Newman girl thinks about parents. 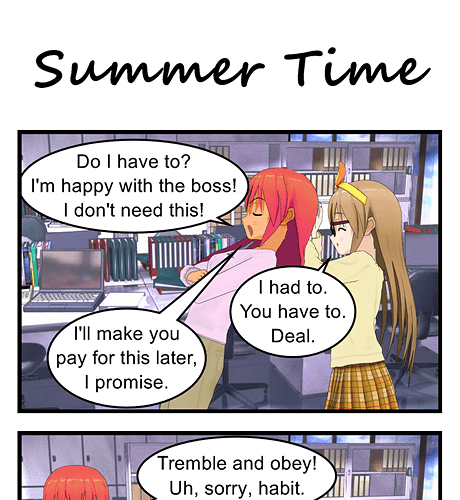 Another special guest, with a hot take on evil parents. 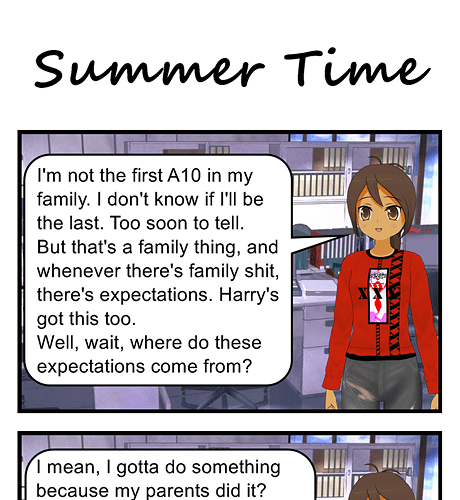 She probably also brought food, but that joke can only be funny so many times. 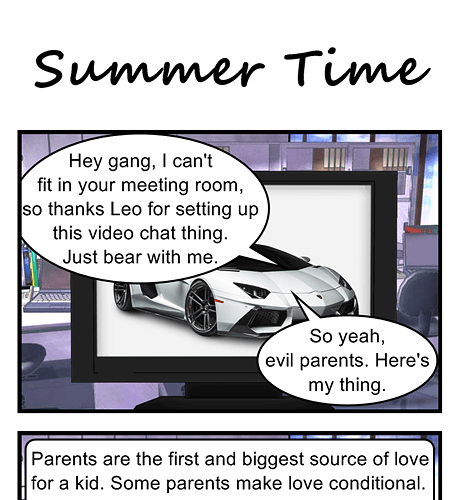 What a motor mouth. 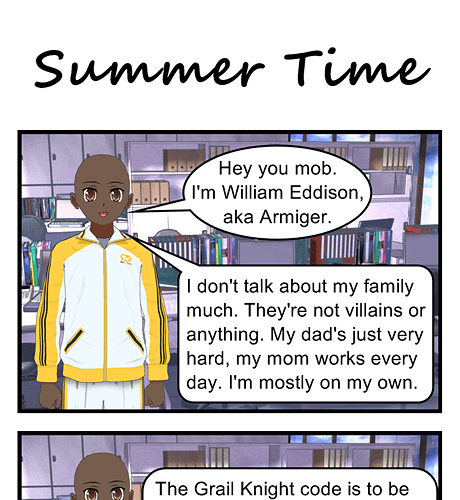 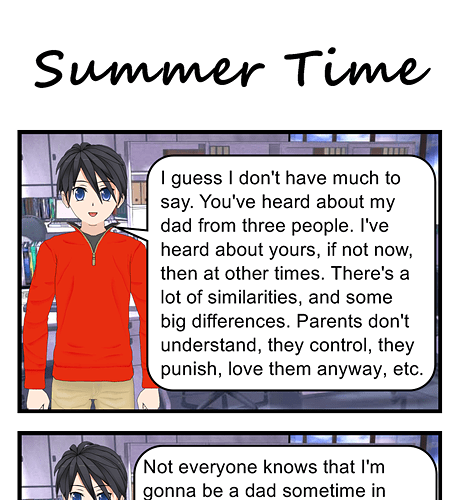 This feels quintessentially Leo to me, which is rewarding.