What would Alex say if debriefed by AEGIS on their classmates? 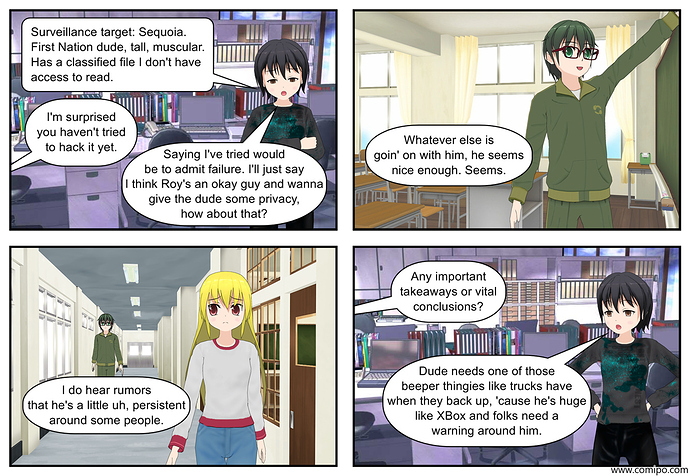 We rolled a 5 for Roy - no great interest. I don’t know if Alex knows that Roy has apparently been stalking Mette, so I left it vague. 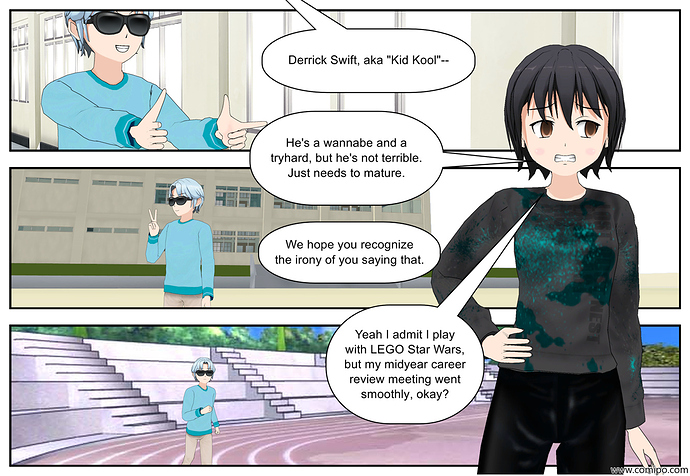 Kid Kool didn’t score well with Alex, getting a 6. 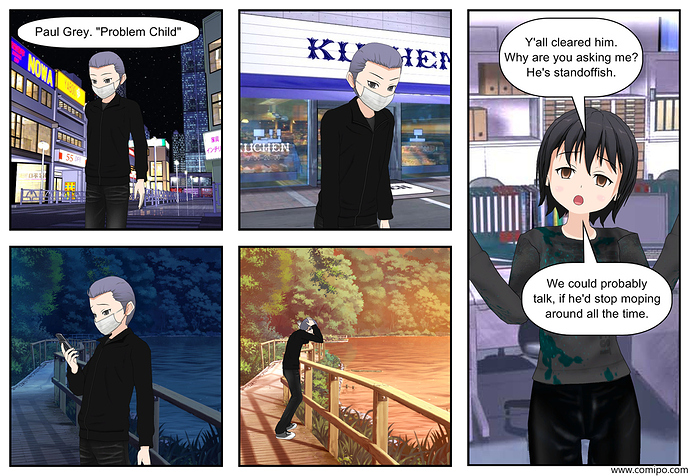 PG/PC got a 6 from Alex, including the iconoclasm bonus, but it wasn’t enough. Maybe he’s just shy?

Another reason I’m doing this exercise is to test out NPC appearances. Folks should comment if they think I nailed (or whiffed) a particular kid’s look.

Vic inexplicably scored a 10 on Alex’s NPC-o-meter, showing an interest in friendship and a potential crush.

If he’s alt-universe Pietro, his last name is Mancini and his family is wealthy, so I’ve been incorporating those details.

I said that initially as a joke. In my own mind I wasn’t thinking of him as alt Pietro. Regardless of alt universe status, I feel, since he was being bullied by Hunter, that he is more of a nerd than a cool kid.

But in NPC development all is fair game. 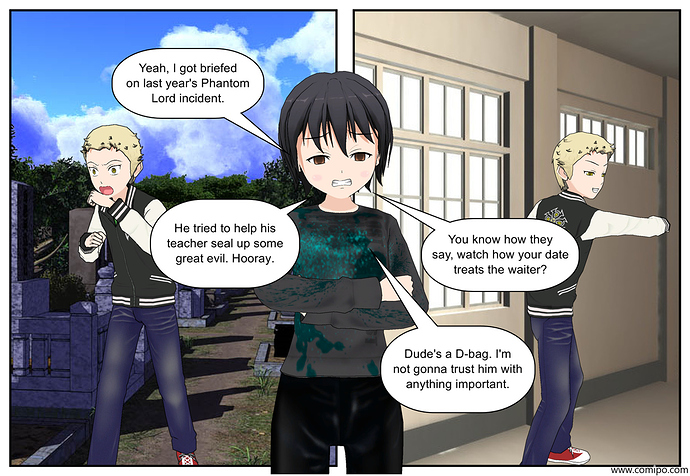 Duck Hunter did not score well, getting a 4.

I wasn’t sure what his powers were so I left it vague. Ditto Vic earlier, who as a Joined would share in them.

I’ll leave these here for the night and see what people think about the format, the individual NPCs, or even Alex’s comments.

The face mask look feels a bit different these days than it might once have been. Also, the gray hair makes him look older.

Both are deliberate. I wanted him to come off as someone who was cut off or isolated, and at least metaphorically older and wiser. 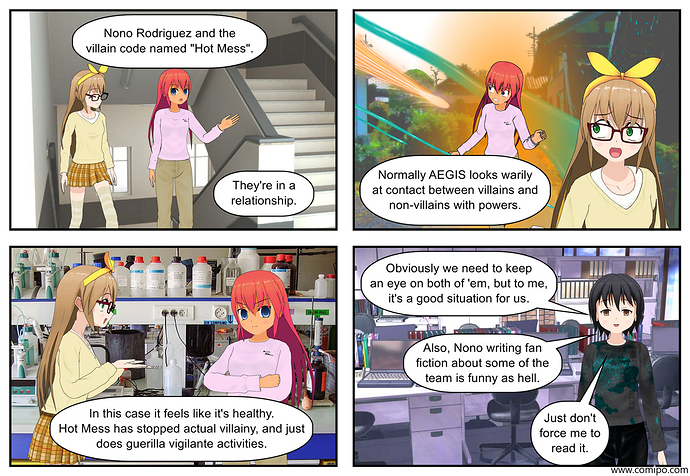 1337’s attitude toward these two has been previously established, so no roll. 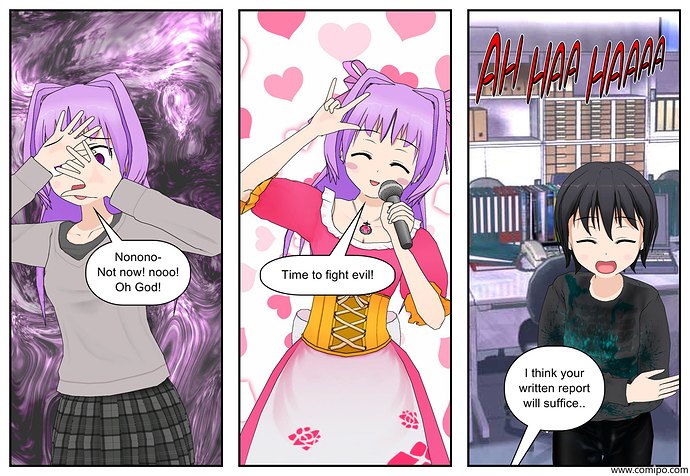 Alex’s NPC roll was an 8 - they’d be friends with Tiffani (assuming Tiffani reciprocated), and definitely understand what it’s like to have a situation imposed on you. Still, you have to laugh.

I the player think it’s funny when the character is Alycia whose superpower is turning into Summer. 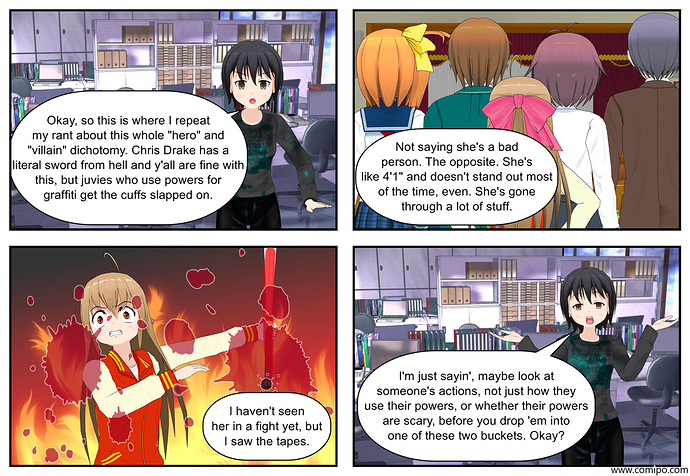 Since we don’t have much on Hellblade (other than she tried flirting with Alex which did not go well), I took the time to pontificate about heroes and villains a bit. 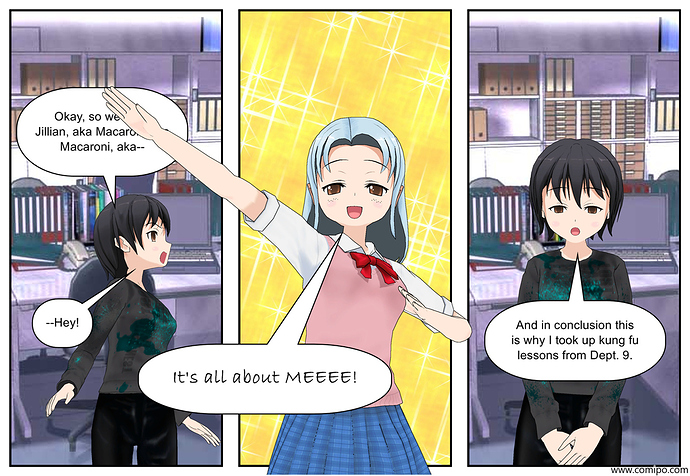 I let the dice decide, but Jillian got a 6, so Alex is definitely not impressed. I thought getting a little meta in presenting the comic was appropriate to the Star, so here we are.

And that’s all the NPCs we have detailed for now! I’ll add more comics once we have more characters. Hope you’ve enjoyed Alex’s snarky asides. 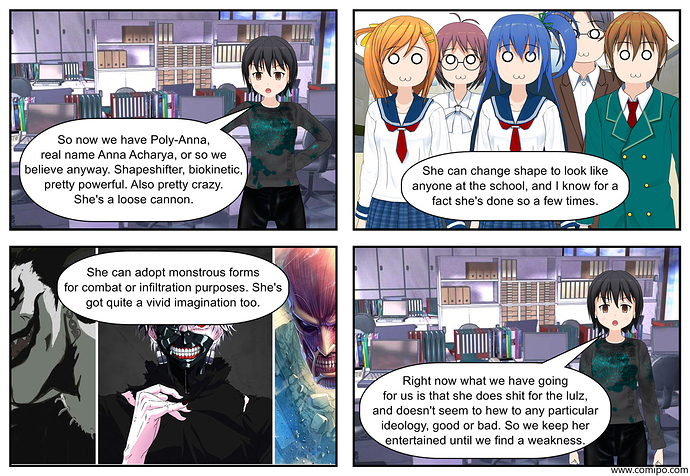 Poly-Anna (she/her, Nova), aka Anna Acharya, who has biokinesis. She can “polymorph”, or change her own shape, disguising herself as anything or anyone, or adopt a monstrous combat-capable form. Once she starts transforming herself, she gets really into it, and tends not to let things like “property damage” or “the villain is defeated” get in her way. That’s scary enough. But every time Alex glances over, she looks like this: [image] Oh and there’s the small detail that if she ever turned ou… 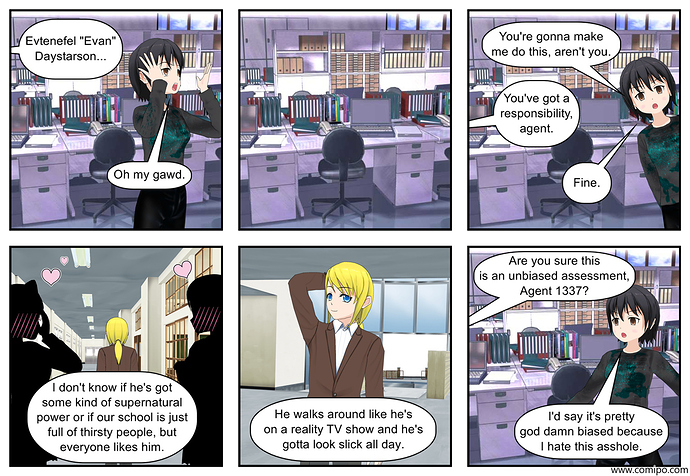 Evanrude, Fey Wray, and Tryhardson are only a few of the nicknames 1337 has selected for this individual. 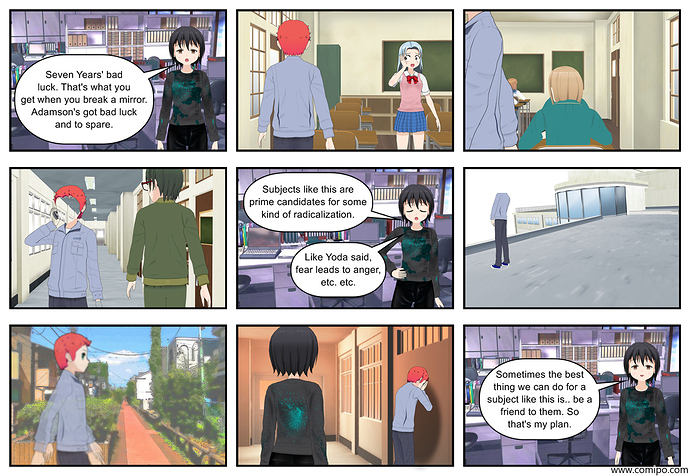 Seven-Year got a 7, and Alex is happy to befriend and support them. 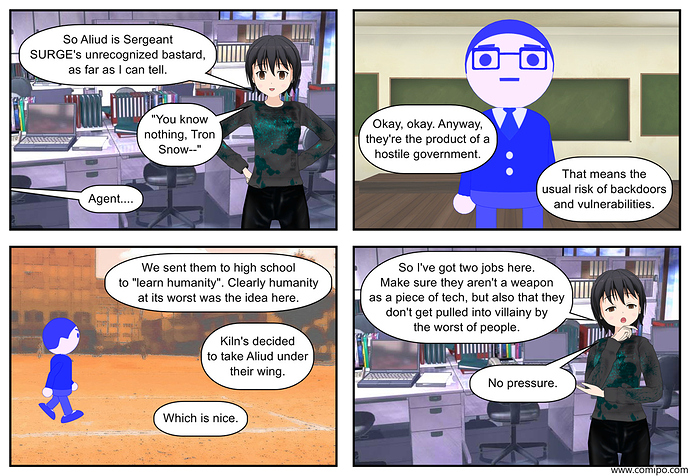 Aliud got a 9, which means friendship. Alex can appreciate a fellow tech enthusiast, and appreciates tech itself even more. 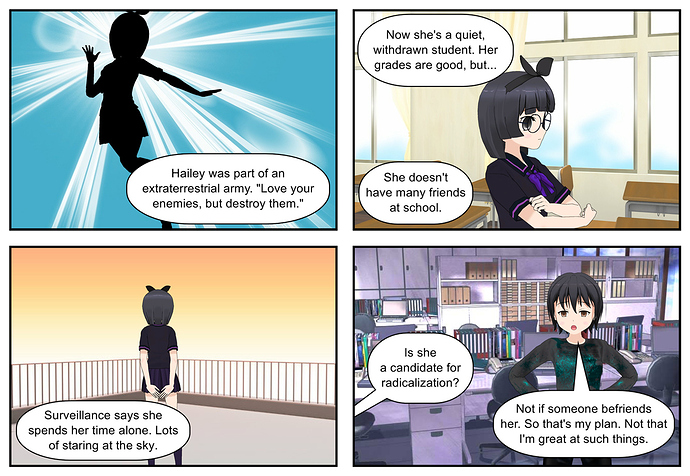 I noticed I totally skipped over Hailey here. The reaction roll gave us a 7 - Alex will be happy to befriend a fellow introvert with a troubled history.