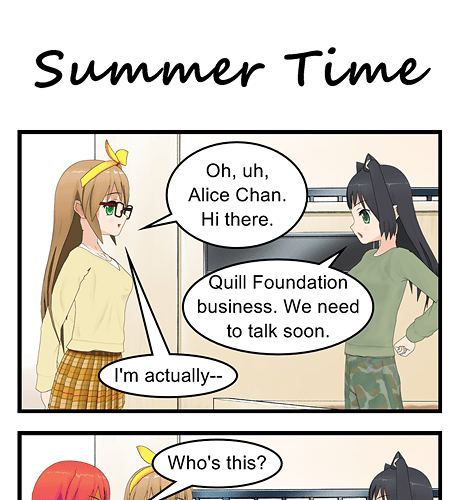 The showdown everyone was hoping for, and nobody was expecting? 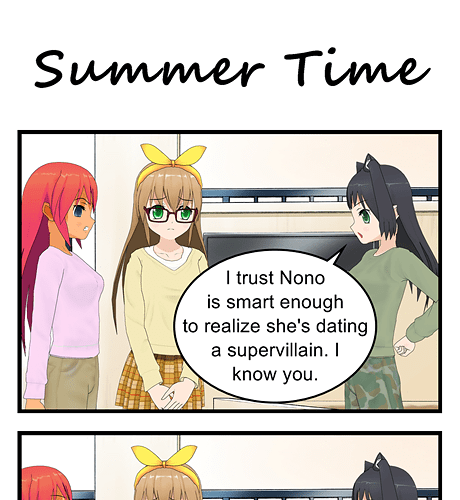 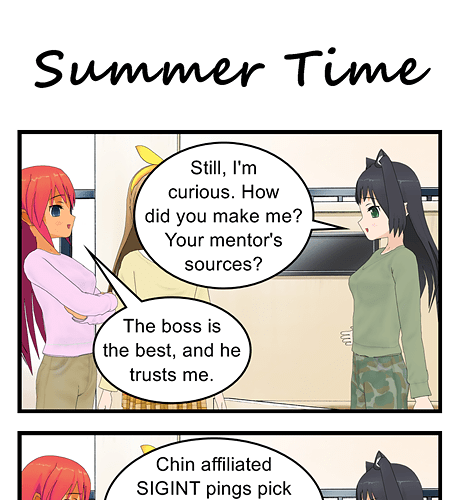 A Shocking Swerve is a plot twist made just for the sake of having a plot twist. There's little-to-no rhyme or reason involved, no foreshadowing, and no way that the audience could have ever seen it coming. The author just conjured this twist … 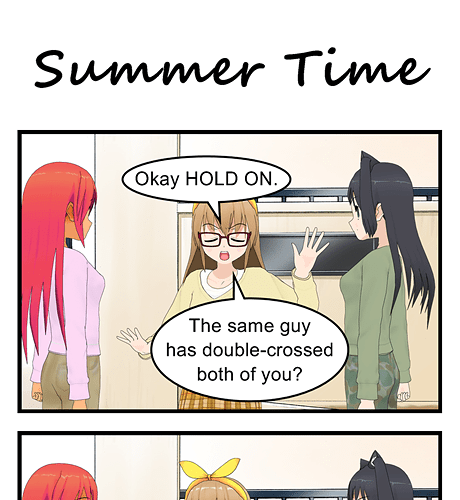 Everyone: Bill’s gonna do another heartwarming story of girl empowerment and teamwork where everyone gangs up on the real bad guy.

In ABSOLUTELY UNRELATED NEWS the Deku-Bakugo fights are still fresh in my mind. Stay tuned. 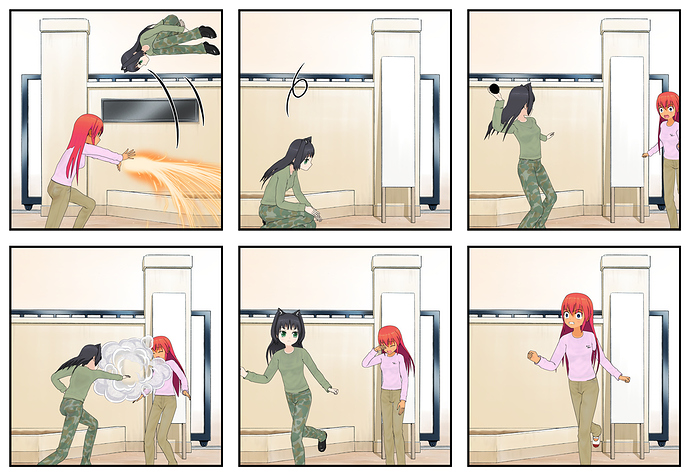 Battle scene part 1. Alycia makes a graceful acrobatic move and pulls out pocket sand a smoke bomb of some kind. 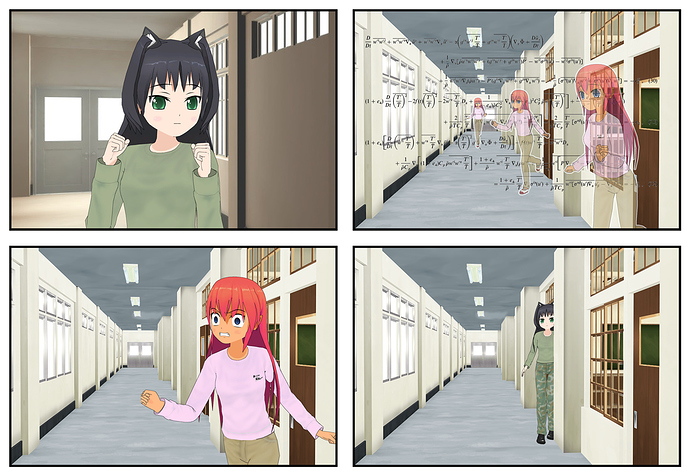 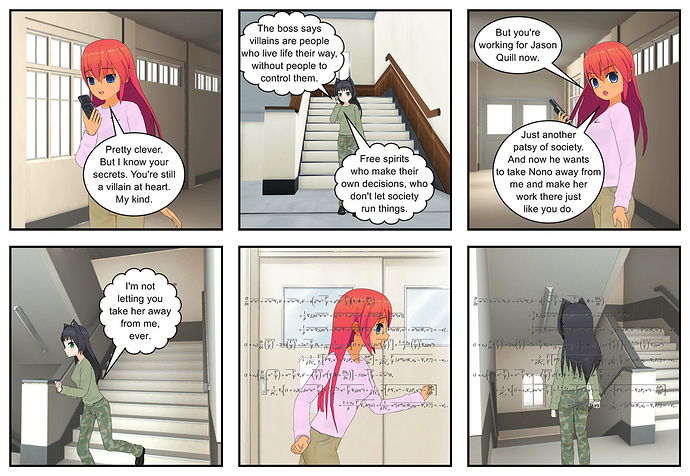 Battle scene part 3. Finally some dialogue, and a motive for Hot Mess?

What do people think so far?

Enjoying it so far. It’s a fun storyline with two of my favorites (everyone is my favorites, fight me on this).

The only thing I’m scratching my head on is the equations in the last two panels of part three. In part two I can easily tell that this is Hot Mess trying to puzzle out where Alycia is hiding, but in this one I’m not so sure. Are they both planning their next move? Little lost, but imaging part four will clear things up.

Keep up the good work.

Yeah, they’re both planning. Emma is not Alycia’s mental equal, but she’s smart, determined, and well trained. They have a lot in common, except Alycia despises the source of her skills and Emma embraces hers.

Okay, I am enjoying this both for the obvious reasons and because you are pushing the cartooning tool beyond what we’ve seen before, and it’s darned impressive.

Which is funny because I assumed that was Alycia calculating where HM would emerge (and successfully figuring out so that she’s behind her).

Are they both planning their next move?

It was a little confusing to me, too, but I presumed it was Alycia continuing her calculations, thus positioning herself at the top of the stairs (which will, no doubt, carry some tactical advantage – perhaps the pipes of the Halon system for the school[1] computer complex runs through the stairwell wall).

Alycia being defenseless without standard weapon load-out (she could probably carry some sort of hold-out, but has a large enough ego to assume she doesn’t need it, and has developed enough respect for those around her to not have weapons caches around the school[1]) would still probably assume she could take HM out, as long as she doesn’t do anything stupid and give her too much of a free shot.

That said, I’m wondering if she’s going to try to talk HM down here, even though she’d be royally pissed at the accusation that she’s “working for” Jason, whom HM considers a “patsy.” If she’s thinking clearly, she’d realize that HM’s feelings for Nono are authentic (and might even relate to them from her own experience with Jason).

So the challenge here for Alycia, at the least, will be figuring out how to neutralize HM without killing her (which would be a lot easier), and balance a desire not to hurt Nono with a desire to slap her silly.

[1] The setting, esp the stairwell, make me think Gardner Academy

Which is funny because I assumed that was Alycia calculating where HM would emerge (and successfully figuring out so that she’s behind her).

That’s what was intended.

That said, I’m wondering if she’s going to try to talk HM down here

The setting, esp the stairwell, make me think Gardner Academy

It is because Comipo is absurdly specific about its stock backgrounds, so I’m using the school images to stand in for some unspecified other thing. 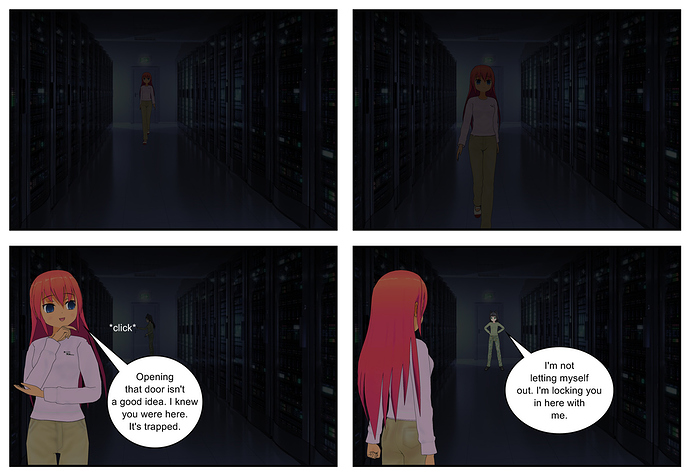 This just got dark. 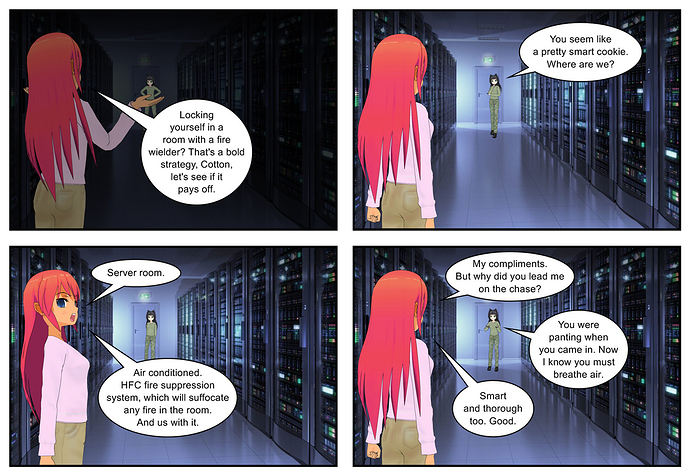 Well, that was not a reference I was expecting, but I’m excited to see where this goes. 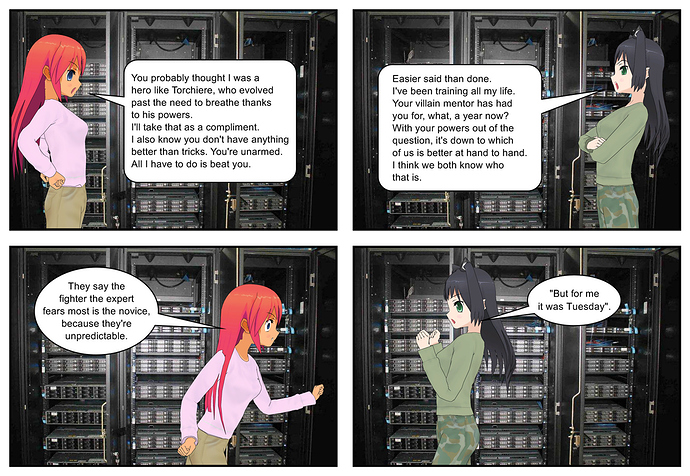 Torchiere is mentioned in this cutscene. We caught Hot Mess’s reference, did we catch Alycia’s?

Well, that was a hell of a snap by Alycia. Didn’t recognize it until I Google into the TV Trope. https://tvtropes.org/pmwiki/pmwiki.php/Main/ButForMeItWasTuesday

I’d forgotten the Torchiere reference, which was itself a variation of a City of Heroes main I had (and the name had been taken, so she ended up being named Torchielle). 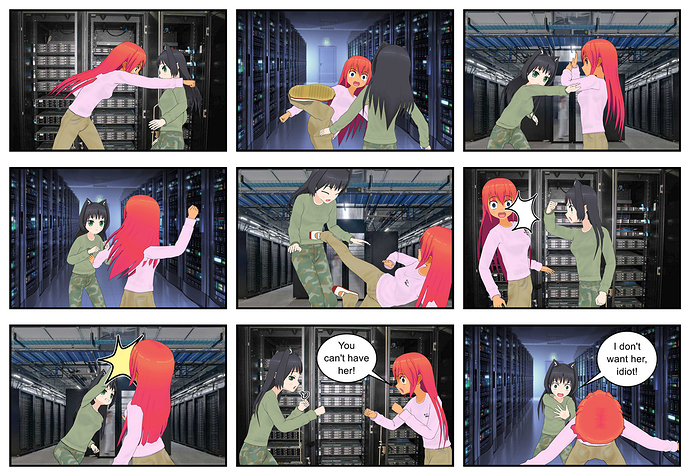 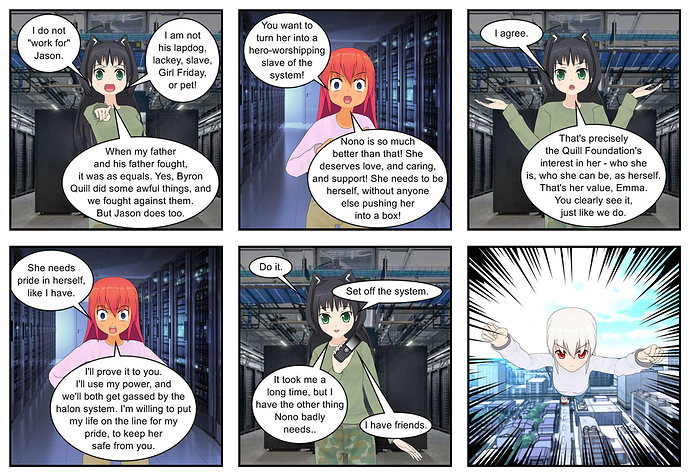 Are we okay with Alycia’s counter-gambit here? Does the conflict make sense and feel right?