So it sounded like there was an intent to do some filling-in-the-blanks on the seating chart in some clever collaborative fashion. So here’s me kicking that off by posting this … 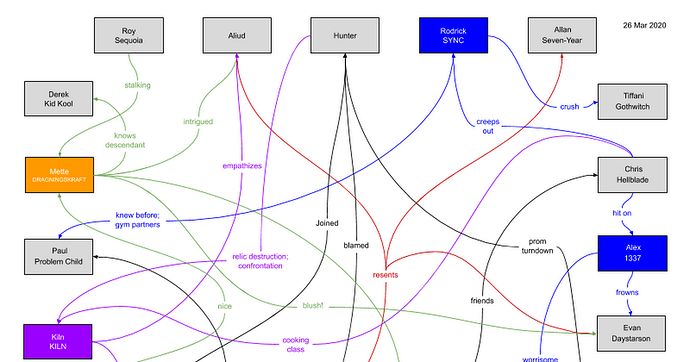 Editorial is nominally in charge of the seating chart process, but it depends on back-and-forth collaboration. We start by drawing a simple classroom - a teacher’s desk at the front, and several rows of student desks. I went with 4x5 because there’s basically 20 playbooks, give or take.

Each desk should be a square that we can write a name and details inside. The process of filling in the seating chart depends on “ask questions and build on the answers.”

"Which one of you is the most popular?”
“And who sits next to you, right here?”
“So, why is this [Todd] character so untrustworthy?”
Etc.

Skip between players, asking questions that tease out drama, insecurities, talents, and relationships. In addition to their name, ask two questions about each character, and ask them of different players. Take this opportunity to create conflicting accounts and conflicting interests. This helps create messy triangles between characters during play, and ensure that no relationship exists in a vacuum.

Write down the two details about the character, then move on to another PC and fill nearby desks.

Continue to create new classmates and ask questions about them until the chart is full. Think about gender and playbooks as you come up with names (to make sure you don’t accidentally fill a classroom with sixteen Jessicas). Make sure a bunch of these side characters have obvious hooks into the PCs, or vice-versa.

So: which one of you PCs is (relatively) the most popular?

Well, Mette is definitely the prettiest, so that would translate to some passive popularity, at least.

SO: for Mette - who sits directly in front of you (1C) in homeroom/advisement?

Dave says, “We had to work on a paper together and he did a lot of the work and helped on the parts I did and wasn’t a dick about it so … yes?”

Because “Kelvin” was taken. Or because he’s a teenage edgelord who thinks misspelling is awesome.

In the interest of keeping this rolling, I’ll leap in. (People on their turn can also feel free to fill in details for NPCs established in Issue 1: Hunter, Vic, etc.)

Follow-up question for Mette re: Kid Kool. You’ve heard all about KK from someone on your old homeship. KK is their ancestor. How does that predispose you to them, and why?

(I’m going to fill in question with anyone where I think we’re missing a couple “pointed at other people” answers.)

Let’s pause adding new names for a second. I want to get Hot Mess and Nono in, and leave a few empties. We’ve got undefined people to fill in questions on.

Bill: playbooks for Hot Mess and Nono? Delinquent and Brain? No idea.

Do still answer questions posed by Dave et all, those who’ve had them posed.

@insomn14 - Who in class did she turn down for a date at last year’s Prom?

Hunter and he hasn’t gotten over it. It fit the “jock dude/popular girl” stereotype so well in his mind, but she’s just not into that.

playbooks for Hot Mess and Nono?

Delinquent and Beacon, per this post from awhile back. 1337 was the Brain of that team, but makes a neat Soldier here.

@fragolakat - What does she do to keep herself famous?

She posts TikToks of herself using her powers. Her most popular video is one where she yells about the proper pronunciation of her name. “It isn’t a macaron like macaroni. It’s macarrrrooon, Stacey. God.” It has since become a meme, with people posting videos where they roll the r for as long as possible, and teens everywhere say “It’s macarrrrrroooon, Stacey.” 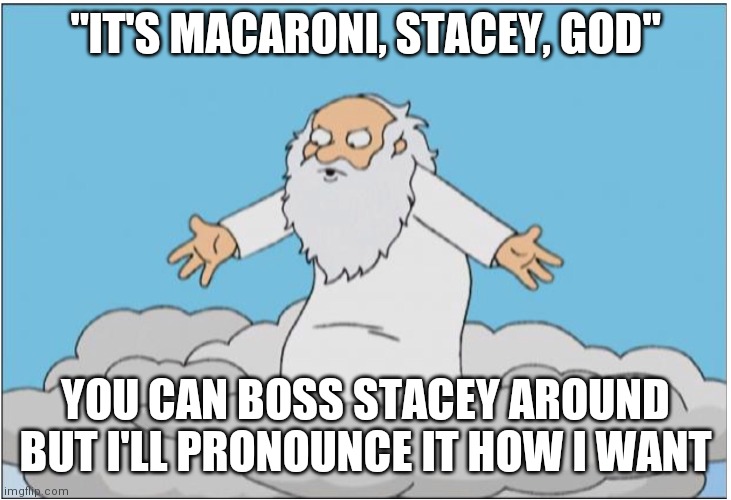 So, alternate universe, and the Beacon playbook is already taken. What’s up in the 616 AU?

It isn’t a macaron like macaroni. It’s macarrrrooon , Stacey. God.”

Is she a transfer student? Latina? Other?

@insomn14 You first introduced Gothwitch, and I’m going to GM my way in here and say we’ve established a strong she/her vibe, but tell us about her playbook.

Also: What about her has made you, umm… pay attention to her, long before you dropped into her family’s q-mobile?

Second question to @garrett - what’s the thing about the intel you/AEGIS have on Gothwitch that legitimately surprised you?

Brain, then. She’ll undoubtedly have a Shame around fire or chemistry gone badly.

what’s the thing about the intel you/AEGIS have on Gothwitch that legitimately surprised you?

She fought a vicious spectral creature - maybe a supervillain, maybe just something - that was preying on mortal grief. Under any other circumstances this is something you’d brag about, but she’s never ever said a word of it in public.

Follow-up question for Mette re: Kid Kool. You’ve heard all about KK from someone on your old homeship. KK is their ancestor. How does that predispose you to them, and why?

The person on the ship is Staci Olav, part of the science community. She’s okay for a topsider, really smart, but self-focused. So wouldn’t mind being KK’s lab partner, but expect him to not be a great conversationlist.